Directorate- General for Economic and Financial Affairs of Kermanshah Province

Kermanshah Province is located at a mountainous region, with a land area of 25,900km2, in Western Iran and the border of Iraq. This province is 1200m above sea level. Of this land, 36% is agricultural lands, 19.85% is forest lands, 44% is pastureland, and 0.2% is housing lands. This province is located at the main rout of East-to-West and Northwest to Southern regions directions, and the main route of Iraq. Kermanshah Province has a diversified weather due to its geographical situation and being located at Zagros Mountain Chains; insofar as it is known as a four-season province. Kermanshah Province has natural and ancient attractions with a rich historical background. Based on foreign travelers, this province ranks the 3rd place following Shiraz and Shush Counties in terms of the number of ancient relics. This province, with a population rate up to 2 million people in 2015, has a landscape of demographic window of which up to 70% of population is on active age; 70% of population is urbanite and about 50% is living in Kermanshah City; and in terms of population, it is the most crowded city in Western Iran being the main center of visits and the passage of Western provinces and the Kurdistan Region of Iraq. According to findings, this province has the centrality of 18-million populations living within a 250km radius of the city. 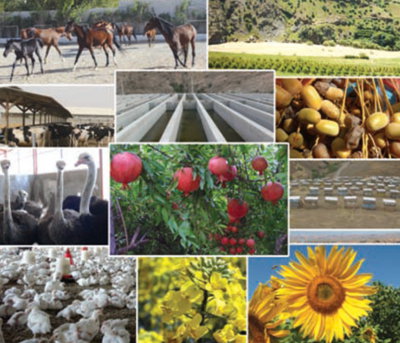 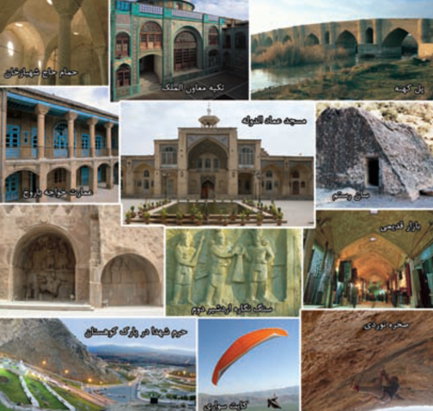 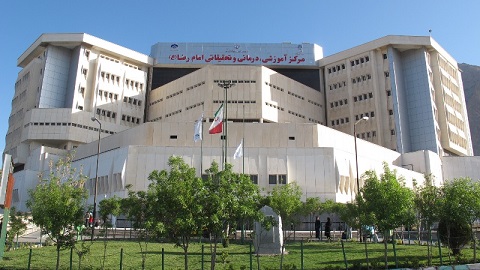 The Province’s Infrastructure and Transformation

Communication ways, including road, railway, and airway, are of the main progress and development infrastructure. Kermanshah Province is located at the main path of Iran’s East-to-West roads, Northwest to Southern regions roads, and the main transit path of goods and services to Iraq. 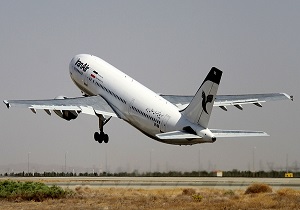 Special zones have been created with the aim of stimulating regional economy, making international commercial connection, and mobility in commodity production and process, non-oil export, attracting and persuading domestic and foreign investors, re-exportation, transit and transshipment of goods in a scope of the mainland. Kermanshah Province, with its strategic position in proximity to Iraq, has two special regions in Eslamabad-e Gharb and Qasr-e Shirin Counties. 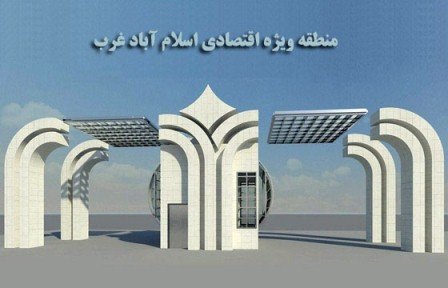 Kermanshah Province has 24 public and private industrial estates and regions, and currently, owning more than 2000hr of land of which 1400hr is ready to be delivered to investors. All of the estates take advantage of infrastructure facilities including water, electricity, gas, telecommunication, sewage system, and green space, and most of them are located at the main transportation route. Being located at industrial estates makes investors to be free of obtaining different licenses, the land is delivered according to engineering principles and an appropriate price with easy payment, and freely in some projects, and the estates are exempted from municipality regulations. Moreover, there are the required infrastructure and full facilities such as road, water, electricity, gas, industrial sewage, telecommunication, internet, optic fiber, insurance offices, bank, emergencies, technological service, etc. 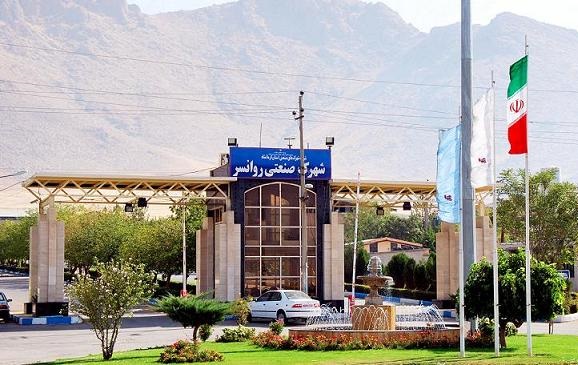 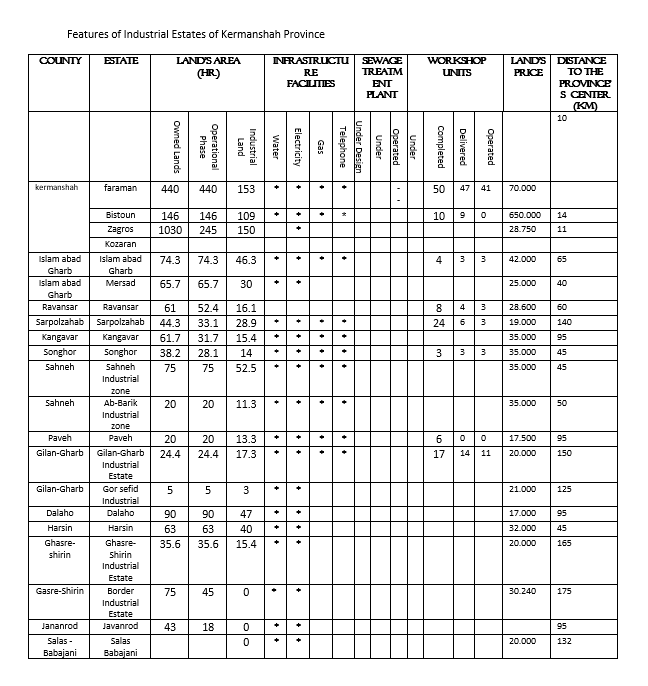 Kermanshah Province has 330km common border with Iraq, with two international customs, i.e. the Parvizkhan and Khosravi Customs, and three marketplaces including the Shoushemi, Sheykh Salleh, and Soumar Marketplaces, playing as a facilitator regarding export and commercial trades. The Parvizkhan Customs is located at a distance of 5km to Qasr-e Shirin County and 180km to Kermanshah City.

The Parvizkhan Customs: This customs and marketplace is one of the economic poles of the country having an area of 30hr, and it is going to be risen to 400hr. Up to 50% of Iran’s non-oil export to Iraq is done through this customs. The Parvizkhan Customs, which is located at the way of the Silk Road, daily passes 800 to 1000 trucks with export freight. In this customs, some affairs such as definitive export, temporary entry of car and truck, temporary exit of automobile, foreign transit and travel affairs, definitive import are done.

The age of the Khosravi Customs is more than 100 years. It is located at a distance of 20km and 200km from Qasr-e Shirin County and Kermanshah City, respectively. The Khosravi Border is one of the official international terminals of Iran making land connection of this country with the Arabic part of Iraq. Definitive export, definitive import, temporary exit, temporary entry, judicial, foreign transit(origin and destination), cooperative and travel affairs of frontiersmen are of the legal procedures of the Khosravi Border.

The Shoushemi(at zero-point border and in a distance of 45km from Western Paveh County), Sheykh Salleh(in Javanroud), and Soumar Marketplaces(in a distance of 67km from Gilan-e Gharb) have been made in order to do border exchanges of peddlers and their main application is definitive export and import of peddlers. Soumar is one of the strategic terminals of the province with the shortest distance between Kermanshah and Diyala Province of Iraq. 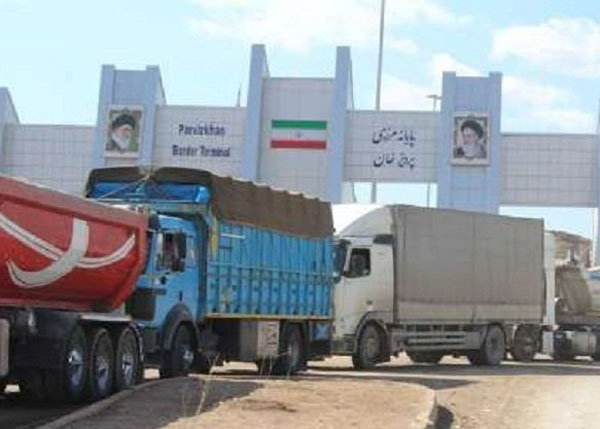 Kermanshah Province has 1027 industrial units with an investment rate of about 40000 billion Rials and employment rate of 30000 persons. The share of Kermanshah Province in terms of the number of industrial units in the country: 1.5%, the level of investment: 2%, and the employment rate: 0.04%. Accordingly, from the industrial viewpoint, this province ranks 23rd in terms of the number of industrial units, 21st in terms of investment level, and 18th in terms of employment rate, compared to national status. Petrochemical products, automobile, metal profiles and bullion, girder and angle iron, tire cord, high-voltage cable, tomato paste, tile and ceramic, cement, a range of China sanitary ware, machine-knotted rugs, a range of diaries, edible oil, and sugarcane-based sugar are of the main products of the province that some of them are as follows:

In industry sector, Kermanshah petrochemical, Bistoun petrochemical, Saman cement, Garb cement, Jahan Folad-e Gharb Complex, and the Cooperative no.1820 are of the most important industries of the province, and in total, producing 660000 tons of Urea and Ammonia, 49000 tons of linear alkylbenzene, 300000 tons of polyethylene, 3.6 million tons of cement, 300000 tons of a range of rebar and girder, and 18000 tons of tier belt and cord. Three large companies, i.e. Cord Group, Kazheh Tile, and Bistoun Tile, are working in the field of tile and China sanitary ware, and with a total investment rate of 966000 billion Rials and an employment rate of 1900 persons, totally producing 24.5 million m2 of tile, ceramic and sanitary ware. 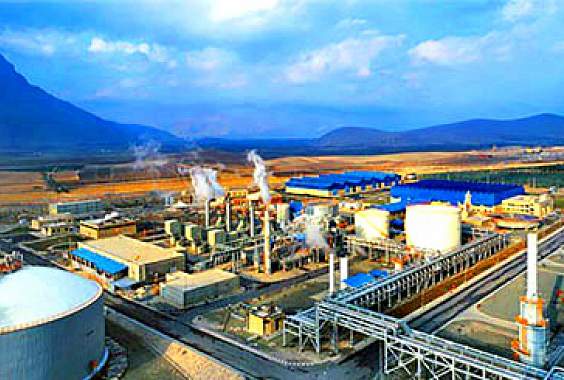 The Individual Investor should Act

Consistently as an Investor

and not as a Speculator